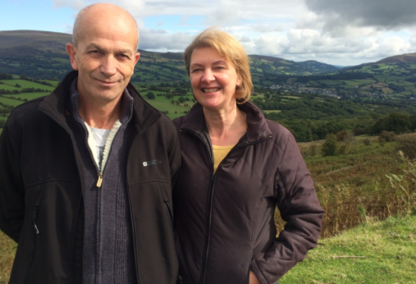 The value of being involved in research 26 Sep 2017

Today we talk with Chris Roberts and his wife Jayne about their involvement in the ROADMAP project. On 4 and 5 September they took part in a consultation with the projects’ Outcomes Definition team. Chris joined the European Working Group of People with Dementia (EWGPWD) and was elected as Vice Chair in 2016. He was diagnosed with mixed dementia (Alzheimer’s type and vascular dementia) in early 2012 but has not let this diagnosis get in the way of leading a full life. He spends most of his time promoting and providing education to others about dementia.

How do you feel about the consultation in Luxembourg?

Chris: I always find working with the EWGPWD very enjoyable, everyone’s supportive of each other and it’s a very relaxing atmosphere. You haven’t got a lot of hope left when you receive a diagnosis.

“Working in an environment like this gives confidence back, gives value and a sense of purpose. The main thing is that the research you’re doing in ROADMAP actually gives us hope as well. This hope is not only for us; it also gives us hope for our children, while we’re getting that value and actually using our own expertise.”

While the professionals work very hard to gain their expertise, we live with the illness. In this context there are things that the professionals maybe can’t find out on their own. So it’s great to work together and while we’re doing that work I learned so much that actually helps me understand my own illness as well.

Jayne: I thought it was going to be a little bit flat and a little bit dry and it was anything but that. It was an extremely rich and powerful experience. The consultation gave me a great deal of excitement and anticipation about looking at the real world and starting to collect real-world data. I see that this work can actually have an impact on people’s lives.

Perhaps the main thing I took away was that this work triggers thought mechanisms in people, contemplating what they need to put into place for later on, when things would be more advanced than they are now. While some of the topics raised were not easy issues to discuss, these were the conversations that we at home, living with dementia, need to have. The on-the-ground aspects of the consultation, the actual surveys, will make people think and start having those conversations, as it allows the subjects to be brought up. It is good that everybody’s views, wants and needs were able to be voiced. I think it’s helpful for later on, when Chris, or the person with dementia, is less able to voice an opinion or desire, as those conversations have already happened.

Chris: The actual research that you’re doing at the moment with your project is quite radical in the thought, because it’s apart from the usual data that’s collected. I am very aware that the usual research that carries on or has been happening and the usual questions that are asked and answered are obviously not working that well, because otherwise we would have come up with something better by now, with regard to treatments and management. I am quite thrilled and excited about the thought, and I think collecting data that’s all around us and using data that people don’t usually collect for research is quite exciting.

Jayne: I like the aspect that the real-world data that will be collected is going to inform the researchers’ outcomes, rather than only looking in a particular area and trying to see if the data fits their hypotheses. In this case it might be possible that this will guide them down avenues that may not have been considered before.

What would be the most important points you would like to tell the scientists in ROADMAP?

Chris: Regarding the most important things that came out of the consultation, I think one is to involve the experts by experience at a much earlier date. Maybe this could even help to save some time and money. I’d also like to say that assumptions shouldn’t be made against anyone affected by dementia, because that’s not all they are. People affected by dementia might have been professors, researchers, scientists themselves. We mustn’t forget their backgrounds and the experiences they might have had in their jobs. I think it is about the importance of all of us working together and that we all have our place to fulfil.

Jayne: The same thing applies to the carers, they too were once scientists, researchers, physicists… and then they become “just” the “carer”. They too have a wealth of knowledge and experience. The message I would like to send back, though, is that, while these surveys – because that was what we were concentrating on in our work programme – may seem to be a very blunt tool, I strongly recommend not to make the assumption that they will be flat. The surveys will bring up a lot of issues on both sides of the coin, for people with dementia and carers, and can raise all sorts of issues and emotions that might otherwise not have been addressed. Providing support for those mechanisms can just be something as simple as a helpline. Don’t forget that even a “blunt instrument” can have very lasting effects on the people that are involved.

Chris: I’d like to thank everyone involved in the ROADMAP project for including those affected by dementia, the people diagnosed and their carers and supporters. It’s definitely the right way to go. I’d also like to thank the researchers for their understanding and patience during the consultation, because it’s not always easy to work with someone with dementia, especially a whole team. I thought it went very, very well and I’d like to further give my appreciation to all the researchers out there that are doing these things for our benefit.

Jayne: I echo what Chris has said. Additionally, I’d like to express my admiration for the sensitivity the researchers showed during the consultation, whilst maintaining a very professional attitude. They have maintained a professional distance without losing the human touch.

How do you feel about being involved as an expert by experience in ROADMAP?

Chris: Being involved ourselves reminds us of the great work that is going on, that a lot of the general public never hear or know about, because most of the things the general public does hear are obviously the failures. It’s a problem, that the media is so focussed on bad news. It’s great to be involved and gain more of an insight into what’s going on, and then we can take that back into other groups and peer support groups and actually give them hope, so it has a massive knock-on effect, being involved in your great work.