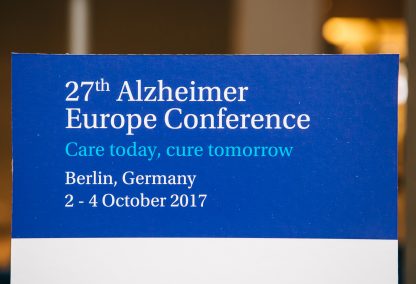 A growing priority in Alzheimer’s disease (AD) treatment and research is how to improve early detection and prevention of the disease. Accurately identifying people at risk of developing AD, and intervening in mid-life to offset this risk, will reduce the impact of the disease and bring down the cost of treatment – an important goal in an ageing society. Making the case for early intervention (EI) in AD, the European Brain Council (EBC) and pharmaceuticals manufacturer Merck (MSD) teamed up at Alzheimer Europe’s Annual Conference in Berlin last month for a symposium showcasing what is being done across Europe. Ron Handels from the ROADMAP project presented his research alongside talks from Nilsy Desaint (MSD), and Alex Milton (University of Southampton).

Before the presentations from ROADMAP and the other participants, MSD staff member Donna Walsh gave an overview of the EI landscape and the economic and ethical case for developing EI interventions. Drawing on the EBC’s estimation of €800 billion as the total economic cost of brain diseases across Europe, she emphasised why it is important to reduce this financial burden in ways that improve outcomes for patients and their carers affected by AD. As such, Donna concluded by explaining that the three talks would show how EI’s can break down barriers and provide solutions that are cost-effective and improve the lives of those using them.

Moving on to the presentations, ROADMAP representative Ron Handels from the Alzheimer Centre Limburg at the University of Maastricht gave a comprehensive introduction to the importance of EI in AD. His research aims to understand the health economic impact of treating AD in its early stages in terms of cost and quality of life. Using computer modelling they studied a ‘virtual cohort’ of 1000 people with normal cognition and AD. They compared the costs and quality of life among people receiving usual care and people receiving a hypothetical intervention that could provide a 50% reduction in mild cognitive impairment. Their findings were dramatic, demonstrating that if such an intervention were available it would enable significantly more people to remain in normal cognitive health for longer. This would be valuable in terms of quality of life and reduce the cost burden of treating symptomatic AD. They found that the break-even point for such an intervention would be €1148 per person per year, and are using this as a guide for developing early interventions that are both clinically and cost effective.

Also focusing on the importance of knowing one’s risk of developing AD, MSD staff member Nilsy Desaint gave a presentation entitled ‘Would you want to know if you’ll get Alzheimer’s?’ She reported on their research exploring public attitudes across Europe to different diagnostic options for AD. This study demonstrated clear public support for early diagnosis and treatment of AD, finding that the majority of people across Europe endorse diagnosis of AD before symptoms develop, even if no treatment is available. When a disease-modifying treatment becomes available, however, this this figure rises even further, with 80% of people supporting EI. However, they also found preferences for different kinds of diagnostic tests. For example, only 50% would be willing to take a spinal fluid test, indicating that there may be a challenge for the uptake of tests that are physically invasive or painful, rather than more straightforward procedures such as a saliva test.

Alex Milton from the University of Southampton then reported on their research about the development of eHealth monitoring interventions that potentially could: reduce the incidence of dementia through promotion of good health maintenance; prevent or delay progression from early or preclinical phases to more overtly symptomatic stages of the condition; and manage symptoms to maximise quality of life in advanced stages of dementia. Alex provided an overview of technologies that may be effective at these different stages, from monitoring apps and wearable devices, to wayfinding GPS devices that enhance the independence and autonomy of people with AD, via ‘smart carpets’ that can carry out gait analysis, amongst others. They found that a wide variety of technologies are in the pipeline which show promise in small studies. However more systematic evaluation is needed in larger studies with longer evaluation periods.

The presentations were followed by a short question and answer session. The session successfully demonstrated the promise and potential of early intervention to prevent and slow AD progression. The symposium made the case for developing not only treatments for the disease once symptoms have emerged, but for a range of solutions for use before the onset of symptoms to improve lives and reduce the burden of the disease.