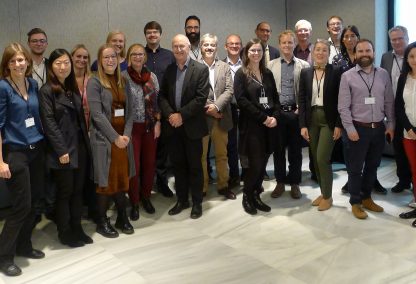 The aim of the meeting was to discuss future plans and to provide the Consortium members with updates on final activities of the different work streams. The project will conclude at end of October 2018.

The first day of the meeting started with a welcome session by John Gallacher during which he recapitulated main project achievements and learnings:

On the second day of the meeting, ROADMAPs communication team provided an overview of the communication activities conducted during the course of the project, their impact, and benchmarked performance with other projects under the Big Data for Better Outcomes umbrella. This included a sustainability solution for access to a repository of open access publications, the project’s ResearchGate account.

This was followed by an update from ROADMAPs Ethical, Legal and Social Implications team with an overview of their work throughout the last two years.

After that, Gloria Garcia from SYNAPSE (Project Management) presented ROADMAPs Data Cube, which offers a ‘landscape’ on data availability in Europe. This 3D ‘heat map’ assessment allows the visualisation of different data sources and how they are able to capture the various Alzheimer’s disease-outcomes, together with their relevance for the different disease stages. Discussions revolved around the exposure of the cube on the ROADMAP website. It had been agreed that the project would let data source holders review it before making it public and that the next Expert Advisory Group meeting and Alzheimer Europe Conference would be good occasions to gather feedback before that final step. SYNAPSE will also set up a Data Cube Committee for future updates.

Before the wrap-up session, Frédéric Reydet de Vulpillieres addressed the future of the project regarding a potential Phase 2. He explained that there would be an open call for a future continuation, potentially under a different name, launched no earlier than June with a yet to be decided project duration.

John Gallacher then closed the meeting explaining that he envisages a maintenance of the ROADMAP community beyond the end of December, including finalisation of publications and maintenance of website updates.