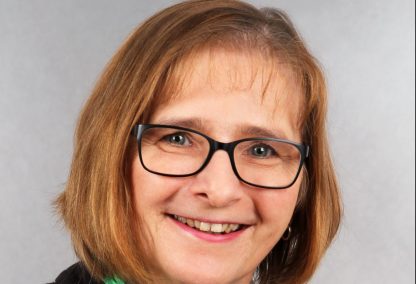 In this interview we talk with Antje Hottgenroth from Eli Lilly about her involvement in ROADMAP.
Antje Hottgenroth is a biologist with a doctorate in Natural Sciences. She held several positions within the German affiliate, the regional and currently corporate company organisation Eli Lilly. During her recent Data Scientist role, she contributed to several company projects for optimisation of real-world evidence (RWE) research and build of a RWE/real-world data (RWD) knowledge repository. She is also industry co-lead of Work Package 3: “Identification, mapping and integration of RWE” and will give us an insight into what that means. In this interview Antje Hottgenroth tells us about her role in ROADMAP, her expectations and challenges. We also get a short insight into the orld of real-world data and the work her team is undertaking for the ROADMAP project.

What is your role in ROADMAP?
My role in ROADMAP is quite similar to the role of other Work Package co-leaders. ROADMAP is organised in several work groups or so called Work Packages (WP’s) and all of them are addressing certain aspects of the project.
Since we are a cross-functional consortium of academic institutions and the industry, each WP is jointly led by one academic and one industry lead. I am industry co-leader of WP3 – together with Pieter-Jelle Visser, who represents the academic side of the collaboration – we work on the identification, characterisation and integration of data and data sources which are valuable for Alzheimer’s disease (AD) research. We are working closely together to facilitate the tasks and communications across all the institutions which are taking part in our WP. Further, we are also here to drive the execution and delivery of the planned outcomes of our WP.

With what kind of data are you working with, what is real-world evidence?
Real-world evidence (RWE) is derived out of real-world data (RWD) by the analysation of this kind of data. RWD is a broad concept, which depends on differing conceptualisations across its research paradigm. In the realm of ROADMAP, we have a definition of data which are coming from structured data sources, and are organised in a pyramid of evidence. These include large broad population-based databases, for example from Nordic countries, the Netherlands and UK. These are national registries and health care registries, together with available electronic medical records, data from general practitioners (GP’s) covering what is documented during daily care of patients when they are visiting the GP’s. We also have dedicated cohort data which are rich in disease-specific information, these are coming from research on patients that have dementia or AD. Last but not least, there are also data from clinical trials which one might not see as RWE, but are complementing as evidence.

What do you find most challenging about the work with RWD?
There are several challenges, one challenge is access to the data (which is restricted by data privacy laws and considerations) especially; a second challenge is to use data that were captured for a different purpose now for research and to consider and take into account, what that means for the conclusions drawn from them.
A third big challenge is, that these data are segmented physically. There are different locations as well as different countries. Then the task is to understand how a combination of the data can be implemented, either through a physical combination or through common analysis protocols or meta-analysis techniques.
A big challenge in the future is to look at data which are directly derived by the patients themselves through analyzing data generated by mobile devices during their daily course of living for example. Not just single encounters a few minutes with their physicians, but really monitoring the patients, their behaviors and their wellbeing continuously. This might enhance our understanding of the course of the disease in a novel way.

What is your motivation and expected outcome of your approach?
The motivation is to have such a broad range of data available and a lot of researchers coming together to look at these data from different perspectives. This approach might facilitate a better outcome instead of everybody working on their own. It is motivating to be able to interact and communicate with researchers who are using data as well as working with researchers and institutions who collect data. Since I am a Data Scientist, I am really fond of understanding data, and what their basic features are, what might be accomplished with them when using them for dedicated research.

What are your expectations from ROADMAP with regard to data sharing?
To have a plan for a network in the end of the two years of the project. First of all, a knowledge library of data sources which are valuable for AD research and that this library will also be maintained beyond the project, so that researchers and institutions or companies such as ours might come back to that knowledge and look for data for research in the future. The second is, that there will be guide and maybe also a physical connection of data which are better accessible for AD research than they are now.