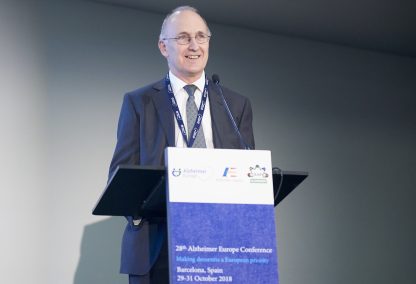 On 30 and 31 October, ROADMAPs journey during the initial Phase 1 of the project was featured at Alzheimer Europe’s 28th Conference “Making dementia a European priority” in Barcelona, Spain. This included a plenary talk by Project Coordinator, John Gallacher, as well as four parallel sessions including participants from numerous Consortium partners, representatives from the European Working Group of People With Dementia, as well as members from ROADMAPs Expert Advisory Group.

Prof. John Gallacher, Project Co-ordinator of the IMI ROADMAP project (Real world Outcomes across the Alzheimer’s Disease spectrum for better care: Multi-modal data Access Platform), closed the engaging first plenary session. He shared the work done by the project so far and some of the challenges that were encountered. The ROADMAP project has demonstrated the ability of academic, industry, patients and regulatory partners to work together on a highly complex, widely distributed, and tightly time-constrained project; established a broad-based and evidence based consensus on the priority outcomes for dementia treatment pathways; developed a comprehensive database of available European real world data; demonstrated that the current evidence base is inadequate for disease progression modelling and detailed health economic evaluation; and has made a strong case for the collection of new data that is intentionally designed to enable early detection and disease progression modelling.

The first session looked at relevant outcomes from the perspective of different stakeholders as Alzheimer’s disease (AD) and dementia progress. It also looked at how these indications were collected using a variety of methods such as literature reviews, Public Patient Involvement, pan-European surveys as well as stakeholder interviews.

ROADMAP mapped the critical ethical, legal and social issues that arise from creating a real-world evidence platform that re-uses existing health data pooled from different sources, but it also addressed ethical concerns and topics that arose during the course of the project itself.  These have yielded interesting outputs and the second session was convened by the Ethical, Legal and Social Implications (ELSI) team who will provided insights on the ethical challenges in AD research and practice when using real-world data.

Another focal point involved the third session with perspectives on real-world data in AD from regulatory and Health Technology Assessment bodies, including the prospective future data collection and further research in this area. These perspectives have been collected via ROADMAPs Expert Advisory Group, which has sought to find the weak spots as well as opportunities for the future in ROADMAPs plans.

The speaker of this presentation has not given the permission for this video to be made public.

Visualising the available AD-related data in different types of European data sources and identifying gaps has proven to be a powerful tool for the design, planning and validation of the models and strategies used to guide future recommendations to enhance AD research. Therefore, the fourth session was dedicated to focus on the presentation of steps taken during the development of ROADMAPs 3D data and outcome assessment, the “Data Cube”.

The speaker of this presentation has not given the permission for this video to be made public.

The conference brochure including abstracts of the presentations can be found here.