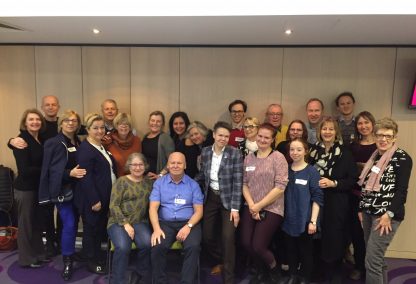 ROADMAP is a private-public partnership of leading institutions and companies with an interest in improving the situation of people with AD. Its goal is to develop efficient uses of real-world evidence (RWE) for the benefit of AD patients and their caregivers. ROADMAP aims to provide the foundation for a Europe-wide real-world evidence (RWE) platform in Alzheimer’s disease (AD) by piloting multimodal data integration tools and engaging with all key stakeholder groups for consensual definition of patient outcomes, tools and methods that are actionable and relevant.

As part of its extensive stakeholder engagement, ROADMAP partner Alzheimer Europe and colleagues at the University of Edinburgh previously held a consultation with the European Working Group of People with Dementia (EWGPWD) about outcome definitions in September 2017.

On December 7 2017, following the Alzheimer Europe Academy event in Brussels, a second consultation was organised by Alzheimer Europe and ROADMAP colleagues from the University of Oxford. This consultation contributes to the Ethical, Legal and Social Implications (ELSI) work package of ROADMAP and set out to explore concerns that may be raised by sharing, re-using and combining health data to create a real-world evidence platform for AD research.

During the half-day consultation members of the EWGPWD and their supporters were asked to reflect and give their views about what kinds of data should be used for research, who it should be shared with, and crucially what measures should be in place to make such sharing acceptable. An initial brainstorming session collectively explored what is understood by health data and data sharing. This was then followed by two focus group discussions made up of one group of EWGPWD members and a second group of the supporters, so that potentially different attitudes and concerns could be explored separately. Within each group examples of data sharing scenarios provided a basis for detailed discussion and ranged over topics such as consent, the protection of confidentiality and privacy, the benefits to patients and the public of data sharing activities, as well as the conduct of data sharing activities in ways that are trustworthy and transparent.

Findings and recommendations from this consultation will be produced in collaboration with Alzheimer Europe and the EWGPWD. They will inform the ethical, social and legal framework being developed for ROADMAP, and ensure that the interests and concerns of people with dementia are accounted for in the design of the platform.