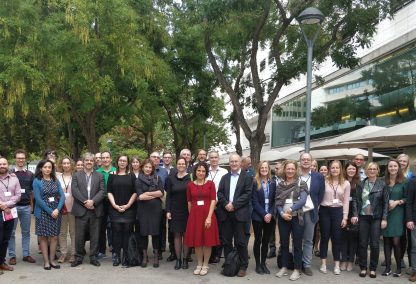 On 16 and 17 October, the partners of the ROADMAP project met for the 4th General Assembly Meeting in Barcelona, Spain.

The meeting chaired by John Gallacher (University of Oxford), aimed to provide updates on the progress of the different Work Packages (WPs), and to discuss WP-specific needs in breakout sessions.

During the morning of 16 October, the GAM started with a break-out session of WP4 (Disease Modelling and Simulation) during which the model validation was discussed internally. The second break-out session focussed on scientific disclosure opportunities, led by Catherine Reed. The project will produce a scientific paper outlining the projects’ aims and expected outputs.

After that, the meeting then was officially opened by Principal Investigator John Gallacher and discussions followed on the data cube (a theoretical model which will encompass linked information on disease progression, outcomes/variables and data sources) by Johan van der Lei. In pursuit of this, parallel workshops were launched, focussing on an overview on the data platforms, ROADMAP has direct access to through its partners (DPUK, EMID-AD and EMIF-EHRs). In parallel another session was held focussing on systematic literature reviews of WP2 (Outcomes Definition). At the same time, WP5 (Health-Economics) held a workshop on their systematic literature reviews, and a workshop they will be holding at the International Conference on Pharmacoeconomics in Alzheimer’s Disease (IPECAD) that will be held in Paris (France) on 15-16 October. Further, next steps in their work progress were discussed.

On the second day, Alba Jené from Synapse gave an update on financials of the project and IMI reporting. This was followed by short WP updates on their respective progress. Further, the data access procedures were presented by Antje Hottgenroth and Stephanie Vos. The meeting was then wrapped up and upcoming actions were recapitulated by John Gallacher.