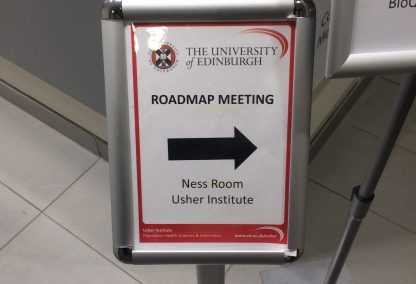 On 22 March 2018 (Edinburgh, Scotland), ROADMAP colleagues from Edinburgh working on the Outcome Definition team convened a data synthesis meeting. The meeting was attended by various Work Package 2 (WP2) partners either in person or via telephone. The meeting chaired by Claire Tochel, aimed to develop a consensual plan in order to integrate the information from the various activities carried out by the WP including; systematic literature reviews, surveys, workshops and interviews. These activities will lead to the development of the next upcoming deliverables “D2.3 Stakeholder generated lists of priority real-world evidence (RWE) relevant outcomes for AD” and “D2.4 RWE progression marker and outcome classification matrix for AD” and provide the basis for a summary of gaps between data requirements and currently available data. The latter constitutes the last deliverable for the Outcome Definition team during ROADMAP phase 1. In advance of the meeting, the WP recently submitted the findings of their systematic literature review entitled “D2.2 Report of systematic review of published and unpublished data identifying important and relevant outcomes in AD and criteria for disease progression” to the Innovative Medicines Initiative.

After that, Amanda Ly introduced the current state of the quantitative surveys, the online version has been closed on 5 March and yielded 425 engagements from professionals (333), carers (80) and people with either mild cognitive impairment (MCI) or dementia (12) with an average completion rate of 51%. Additional paper survey collections in Edinburgh and Oxford memory clinics are currently ongoing to gather the responses of more people with MCI respectively dementia and carers until the end of April.

Following this, Mia Nelson gave an overview of the qualitative work that has been going on. She is currently analysing transcripts from a 2-day workshop with the European Working Group of People With Dementia (EWGPWD) and their carers, as well as from a series of individual interviews with professionals such as ethicists, health economics, representatives of Alzheimer’s associations, industry representatives and clinicians.

During the final session, Annette Bauer presented work that has been conducted by the London School of Economics on the perspective of Health Technology Assessment and regulatory agencies through an additional systematic literature review. The aim is to understand whether the processes employed by these agencies (in form of technology assessments) lead to prioritisation in outcomes and outcome measures that might vary between European countries. In addition to this, potential publications were discussed with an emphasis on publishing the SLR (D2.2) on outcome priorities along with findings from the EWGPWD and their supporters/carers consultations, giving an insight into what constitutes a meaningful delay in disease progression and when a delay in onset of dementia is considered meaningful.