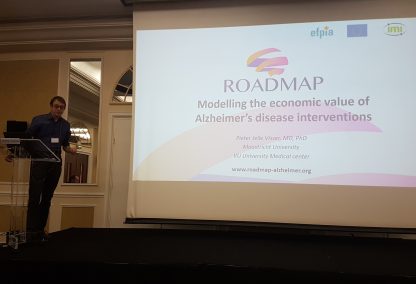 Anders Gustavsson gave an overview of health economic modelling approaches in Alzheimer’s disease (AD), covering: Markov models; regression models; Discrete Event Simulations; technology appraisals and reviews; predementia AD models; the US forecasting model; individual patient simulations; granular representations of AD; and mortality models. He included some remarks about how to improve predementia modelling in AD, and discussed some challenges to modelling across different countries and clinical settings before concluding. Here we give a brief overview of each of the models and the conclusions of the presentation.
Markov models describe AD as constituted by discrete states of the disease, where each state is distinguished by the severity of symptoms or degree of dependence. The advantage of Markov models is that they are a simple way to understand a continuously progressive disease such as AD. Regression models are a more granular alternative to Markov models, which can be used to make parallel simulations of individual disease indicators and outcomes. A third option are Discrete Event Simulations. These simulate specific events in AD, rather than its continuous progression over time. Discrete Event Simulations are computationally efficient, as they only require updating when specific events occur.
There is an increasing focus on improving predictions before the onset of symptoms of AD and as such, economic modelling is now being carried out on predementia states. The first models to include predementia stages emerged in 2012, typically identifying predementia as one specific state and annually attaching a risk of the disease converting to mild dementia each year. One such model is the US forecasting model, developed in 2017. It focuses solely on epidemiological outcomes rather than costs in pre- AD dementia states. Anders explained the need to improve predementia models, and presented several development needs including better markers of disease progression (e.g. biomarkers, early cognitive composite measures and instruments to measure changes in activities of daily living) and need to better understand the relative impact of AD severity and age on mortality.
Anders completed the presentation with data to show the challenges of modelling accurately between countries and different healthcare settings, before concluding with final recommendations for work that needs to be done to improve modelling accuracy. These include; more granular representations of AD; the need to include more biomarker data; better depictions of predementia states; improved mortality data; and improved data on treatment effects and outcomes.

Ron Handels’ presentation focused on AD modelling in a specific context, namely the dementia registry data in Sweden (SveDem). The key aim in this case study was to estimate disease progression and mortality for health economic modelling purposes. Ron explained that SveDem holds comprehensive data about people with dementia across Sweden. They calculated the probability of transitioning both forwards and backwards between mild, moderate, and severe dementia. Having done this, they examined these data to a greater level of granularity, calculating the probability of moving between very mild, mild, mild / moderate, moderate, moderate / severe, and severe.
In concluding, Ron recommended that given the scale and depth of the information held by SveDem that this database has the potential to be used to take model development to ‘the next level’. He also reflected on the reduction of uncertainty of estimates (i.e. parameter uncertainty) by using a large sample that includes almost all persons with dementia. He discussed the impact of missing data and recommended that it would be sensible to carry out structural sensitivity analysis on the various assumptions and techniques to deal with missing data.

Finally, Pieter Jelle Visser gave an extensive presentation, from which we will summarise a few key sections, most importantly that which covers ROADMAP Work Package 3, for which he is a co-lead. First, Pieter Jelle introduced ROADMAP, gave a broad overview of its aim and the challenges in AD treatment that it seeks to meet. He described the data sources linked to ROADMAP by Work Package 3, namely: research cohorts of two million individuals; details of 80 million people held in disease registries and electronic health records (EHRs); and trial datasets containing information about 100,000 individuals. The core platforms used for identifying relevant data were: the EMIF catalogue, which uses meta-data to search cohorts and EHR databases; the EMIF tranSMART and DPUK informatics environment, which was used for cohort and cross-cohort analysis; the SAIL / SHIP platforms for secure linkage of cohorts with EHRs; and the Erasmus MC Jerboa and Octopus tools. Last of all in the Work Package 3 report, information was presented about three data identification and retrieval pilot studies that the team carried out. The first was a collaboration with IMI Prism and used the BeHAPP app to remotely assess social activity among the Amsterdam Dementia Cohort. The second sought to validate diagnoses of dementia in EHRs using the SIDIAP longitudinal database of medical records in Catalonia. The third was an EHR linkage study in collaboration with the BESIDE project, and used a range of disease course databases from cohorts in the Netherlands.

Having introduced the datasets used in ROADMAP, Pieter-Jelle went on to explain how the data collection and management tasks of Work Package 3 feed into work elsewhere across ROADMAP. The clinical outcomes team from Work Package 2 are conducting systematic literature reviews to determine what AD outcomes are prioritised by patients, carers, and health professionals, and what these groups consider to be a meaningful delay in delaying progression of the disease. Work Package 4 is using ROADMAP data for disease modelling to better understand how AD progresses from its preclinical phase, to prodromal AD, to mild dementia, and finally to moderate or severe stages of the disease, so that predictions about this progression can be made more accurate. Last of all the data are used by the Health Economics team of Work Package 5, which is seeking to determine what the health economic impact is of treating AD in its early stages in terms of cost and health-related quality of life. It is doing this with a view to understanding the cost-effectiveness of disease modifying treatments that could reduce by 50% the probability of converting to more severe stages of dementia.