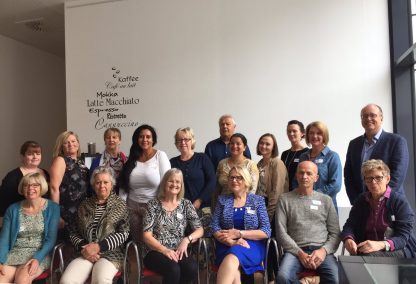 In order to provide feedback and advice to Alzheimer Europe (AE) in relation to its own work and its involvement in various EU projects, AE set up the European Working Group of People with Dementia (EWGPWD) in 2012. The group is currently comprised of 10 people with different kinds of dementia. Each member is nominated by a national Alzheimer Association.

On 4 and 5 September in Münsbach, Luxembourg, AE organised and jointly facilitated a consultation with the EWGPWD and ROADMAP project colleagues from the University of Edinburgh, to consult on their project activities within the work stream “Outcome Definition”.

During the two days, various discussions revolving around the potential usefulness of real-world research in dementia and Alzheimer’s disease (AD) were held. In order to gain insights into both the members’ and their carers’ own lived experiences, the attendees split into two groups (one consisting of the members of the EWGPWD and the other of their carers), with a couple of joint feedback sessions, which provided participants with an opportunity to share their thoughts about the consultation and their main conclusions for the ROADMAP researchers. The sessions entailed discussions on disease progression, addressing the usefulness of terms describing stages, as well as what changes indicate a progression in the context of AD. Other discussions focussed on treatment and research surrounding hypothetical drugs that could either delay the onset of dementia or slow down its progression. This was concluded by a recapitulation of what a meaningful delay in disease progression might entail and how meaningful real-world evidence could potentially be captured using measures not typically used in clinical trials.

On 5 September, both groups provided feedback on a survey that is being designed to unpick which outcomes are most important and most helpful in understanding Alzheimer’s disease (AD) progression. The consultation ended with a joint feedback session about the activities and the project in general, in which the EWGPWD identified the top five messages they would like to pass on to the researchers working on the ROADMAP project.

If you are interested in finding out more about consultation, you can find an interview with Mia Nelson from the University of Edinburgh (who is focussing on the ROADMAP stakeholder engagement) here.