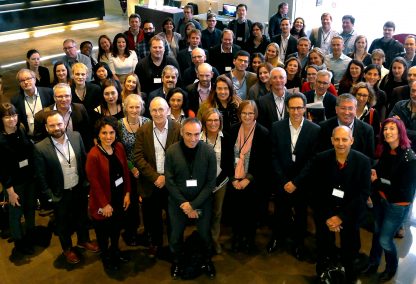 On 23 and 24 March, the partners of the ROADMAP project met for the 2nd General Assembly Meeting of the project in Barcelona, Spain. The meeting was chaired by John Gallacher (University of Oxford) and Frederic de Reydet de Vulpillieres (Novartis on behalf of EFPIA). The aim of the meeting was to provide an overview of the progress of the project and to identify opportunities for further cross-Work Package collaboration.

During the second day, the current selection of disease models and their validation were discussed. This presentation was followed by a fingerprints demo on data source overview and characterisation. Jacoline Bouvy (NICE), Christine Gispen (College ter Beoordeling van Geneesmiddelen) and Robin Thomson (Biogen) introduced the work on regulatory and HTA engagement, including the platform to engage with regulators/HTA bodies.

Following on from that, the Ethical, Legal and Social Implications (ELSI) literature review possibilities were discussed with regard to potential scenarios. The presentations ended with an overview of the communications plan and tools, including the launch of the website. The meeting was closed by the members of the Executive Committee with a recapitulation of action items and an outlook on the next meetings.