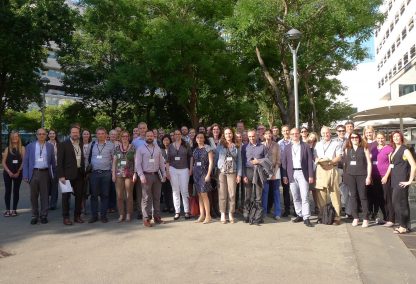 On 12 and 13 June (Barcelona, Spain), the Real World Outcomes across the AD spectrum for better care: Multi-modal data Access Platform (ROADMAP) Consortium gathered for their 3rd General Assembly Meeting (GAM). The meeting was chaired by John Gallacher (Project Coordinator; The Chancellor, Masters and Scholars of the University of Oxford) and Frédéric de Reydet de Vulpillieres (Project Leader, Novartis on behalf of EFPIA). The aim of the meeting was to provide updates on the progress of the different Work Packages (WPs), discuss the research questions and how the specifications and amendments of those influence the specific plans of the WPs in the next three months.

During the morning of 12 June, members of specific WPs met in break-out sessions to discuss their ongoing work in face-to-face settings; these included discussions on survey work within “Outcome Definition”, “Disease Modelling and Simulation” and “Ethical, Legal and Social Implications” (ELSI) where plans for ongoing work on the ethics guidance were discussed.

The GAM then officially started with a welcome by the chairs of the meeting. Frédéric de Reydet de Vulpillieres, introduced the achievements of the project so far, this was followed by an introduction to the upcoming discussions on the revision of the specific research questions with regard to the project’s “Use Cases”, given by John Gallacher. After that, Carlos Diaz (Project Management Office, Synapse Research Management Partners S.L) gave an overview of the so-far submitted and upcoming deliverables, with an outlook on upcoming administrative tasks.

Then, followed seven short WP updates, after which the project’s discussions and developments on the research questions were taken up from the previous “Research Questions workshop”, on 12 May in Amsterdam. The questions were proposed by the core group of Consortium scientists and initiated feedback from each WP on these, which led to an open discussion and initial feedback by each WP on how this impacts their future work. The first day ended with a meeting of the Executive Committee.

On 13 June, Catherine Reed (Eli Lilly and Company Ltd) introduced the discussions on the strategic results that are to be achieved in ROADMAP phase 1 on which the EFPIA partners gave feedback, this was followed by an overview of the publication policy process.

Jacoline Bouvy (NICE), then gave an update on the development and role of the Expert Advisory Group (EXAG), which is essential in the development of a real-world evidence strategy for Alzheimer’s disease/dementia. The EXAG consists of a group of experts that aim to ensure the provision of regulatory, Health Technology Assessment and payer involvement.

Each WP then gave feedback on their plans for the next three months focusing on the updated research questions. The Project Coordinator then recapped on how the different work streams of the project fit together and invited the project Consortium to provide feedback on his overview, after which the GAM ended.