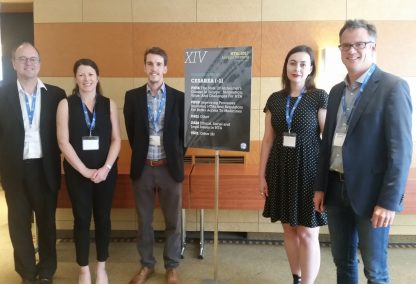 On 20 June, a ROADMAP related panel session was held at the Health Technology Assessment international (HTAi) annual meeting that took place in Rome 19-21 June. Four speakers from the ROADMAP Consortium presented a wide range of perspectives on the state of Alzheimer’s disease in Europe including innovation, value and challenges to HTA.

Michael Happich (EFPIA – Eli Lilly and Company Ltd), moderator of the session, introduced the implications of upcoming new therapies and diagnostics on the AD treatment horizon over the next five years. Each presentation was followed by questions from the audience with regard to the raised topics.

Jean Georges (Alzheimer Europe – AE) followed up with perspectives of patients and caregivers regarding the impact of Alzheimer’s disease (AD) on carers and attitudes to diagnosis and predictive testing, this included the presentation of findings from the Alzheimer Europe surveys “The value of knowing” and “Who cares? The state of dementia in Europe“.

The second speaker, Ron Handels from the Maastricht University, gave an overview of health economic considerations for new interventions in AD, introducing results from the European Brain Council project which aimed to analyse the potential health-economic impact of a hypothetical treatment for AD starting in the pre-dementia phase.

Next, Jacoline Bouvy (National Institute for Health and Care Excellence) gave an overview of different perspectives for potential disease modifying therapies in AD, explaining the European situation with regard to the specific focus of regulatory agencies, HTA bodies as well as payers. She also introduced ROADMAP’s dedicated Work Package for regulatory, HTA and payer engagement as well as the Expert Advisory Group (EXAG), which ensure the project’s outputs might have meaningful applicability in the regulatory, HTA and payer context.

Catherine Reed (EFPIA – Eli Lilly and Company Ltd) then introduced the challenges for AD value proposition and real-world evidence (RWE) in the context of new AD treatments which led to the presentation of the ROADMAP project, objectives, opportunities and its goals.