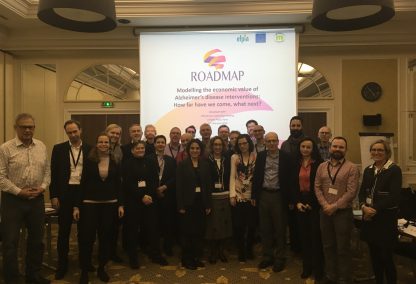 ROADMAP workshop Modelling the economic value of Alzheimer’s disease interventions: How far have we come, and what next? 15 Feb 2018

On Wednesday 14th February 2018 the Health Economics team from Work Package 5 convened a workshop in Paris to coincide with the IPECAD (International Pharmaco-Economic Conference on Alzheimer’s Disease) conference taking place the following day. The workshop entitled “Modelling the economic value of Alzheimer’s disease interventions: How far have we come, and what next”, was a great opportunity to discuss progress and to consult invited experts in health economics about how to proceed from here. Slides of the presentations are available on the downloads section of our website.

The workshop kicked off with a short general introduction from Work Package 5 co-lead Alastair Gray (University of Oxford), who welcomed the group, providing an update and contextual overview for the day. Following this, the first session featured presentations from advisers on current and planned research on Alzheimer’s disease (AD):

The second session was led by ROADMAP members Michele Potashman (Biogen) and Ron Handels (Maastricht University). It focused on the proposed structure of a future economic model as set out in the model specification which is being developed in Work Package 5.

Session three was also opened by Michele Potashman, who explored the question of how to extrapolate pre-dementia trial outcomes to later in life. One aspect of this is the difficulty of defining unambiguously to what ‘pre-dementia’ refers or when it begins, given that it necessarily deals in the absence of symptoms rather than their presence. Michele described the lack of clarity on whether extrapolation should be based on age, cognitive status, or biomarker status, and it was agreed that this is one area where better data are required.

There was general agreement on these points, and that the strongest forms of validation will be blind validation both externally and longitudinally.

The final session of the day was opened by Anders Gustavsson (Quantify Research on behalf of ROCHE), with a presentation considering the significance of mortality for economic modelling in AD. He began by providing some statistics regarding the relation between mortality and ageing, the relation between the two once an AD diagnosis has been factored in, and mortality independent of each disease stage. He then presented some data on the impact of disease staging on mortality. This outlined the increased risk of death at each stage of the disease, the impact of age upon the risk of being at each particular stage, and the possible impact on mortality of a disease modifying treatment. Anders closed with a discussion of four key questions:

Finally, the importance of identifying data limitations, and of prospectively planning ways to collect the data required, was emphasised by John Gallacher (ROADMAP Project Coordinator), who suggested that many of the issues that had arisen in the course of the day came back to these data deficiencies.

In conclusion, it was agreed that the proceedings of the day would be written up and circulated, and that all slides would be made available to participants. 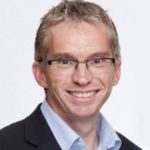 “The ROADMAP Team – WP5 Health Economic Modelling – are taking a thorough approach in their assessment of model scope, structure and parameter inputs, with the aim of setting out a model specification.  Together with the detailed set of reviews underway on resource use, costs and health-related quality-of-life, the WP5 efforts will set out a great foundation for a Phase II model development programme.”

Alastair Gray, Professor of Health Economics and Director of the Health Economics Research Centre (HERC), Nuffield Department of Population Health also provided us with a comment on the Workshop: 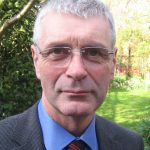 “The ROADMAP work package 5 workshop in Paris was an excellent day which more than met our expectations, with a very high level of engagement and active contributions over the whole day from the external experts and the ROADMAP participants. It helped to identify some key questions to be addressed when continuing preparation of our economic model specification, and some important evidence gaps, but also major areas of agreement and consensus.“