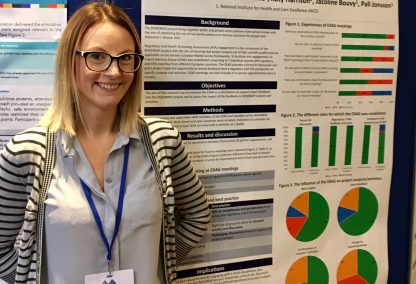 An online survey of ROADMAP Expert Advisory Group (EXAG) members and members of the Consortium was undertaken by Work Package 6 to evaluate how well the EXAG had supported HTA and regulatory engagement in the ROADMAP project and to assess the impact of the EXAG’s feedback on ROADMAP outputs and activities. Responses were received from 25 consortium members from across 26 partner organisations and 5 members of the EXAG. The results of the survey were presented as a poster at the recent Guidelines International Network conference in Manchester. The following provides a brief summary of the overall findings.

Positive experiences of the EXAG in fulfilling the roles for which it was established and the the impact of the EXAG’s feedback on project outputs and activities were received. In particular, the role of the EXAG in providing feedback and input from a regulatory/HTA/payer perspective on ROADMAP activities and outputs, and the provision of new insights from the EXAG that project leads would not have received otherwise.

For those respondents who had presented at an EXAG meeting, the main benefits included an increased understanding of the perspective of regulators/HTA/payers about specific questions and areas of work, the validation and endorsement of current strategies, and the provision of feedback that would shape future work.

“Our work package has presented and the feedback was extremely valuable, and helped shape the next steps of the work. Having the inputs from the EXAG make the work meaningful and relevant, rather than an academic exercise.”

A number of areas for improvement and best practice were identified by EXAG and Consortium members. Areas of best practice related to the composition and size of the EXAG, particularly the mix of competences and perspectives from across the regulatory and HTA landscape, and the challenging discussions arising from the balance of perspectives in the group. Areas for improvement were mainly associated with the format of EXAG meetings, such as the need for more frequent face-to-face meetings.

Overall, feedback from the survey indicates that the EXAG has been a successful and valued format for engaging with a multi-disciplinary group of experts. It has provided both a forum for lively discussions and the opportunity for the project to gain valuable regulatory and HTA input on key outputs and activities.

“Overall, I think having the EXAG in ROADMAP is excellent as it would be good to ensure that, when there is an efficacious, safe drug to treat AD, it can be accessed by patients who need them as soon as possible.”